Our bar, BAR50, invites you every Friday in February to a cozy Friday Jazz concert, where you can enjoy a glass of wine, a good cup of coffee, snacks and much more! There's always free entrance for everyone, so bring your colleague, friend or family member and enjoy your afternoon with some soft jazz tones and a view over Copenhagen’s water canal.

Novo Cais Trio is a brand new project of musicians who share a strong passion for Brazilian music, especially Bossa Nova. They propose a repertoire that hasn't yet been explored in the Danish environment, bringing to new life songs from some of the most outstanding Brazilian composers such as Caetano Velozo, Chico Buarque, Toquínho, Vinicius de Moraes and of course Tom Jobim

Martin Buono 1986 grew up in Lolland where his music career started at the young age of 9 years old. In 2016, he was accepted in Copenhagen conservatory with classical guitar as the main subject and he completed the courses with the highest degrees. He was awarded as years’ guitar talent in 2009 during Aalborg international guitar festival. In 2010 he has been living in Spain where he has been studying flamenco music and perfecting his style with some of the finest guitarists of this time like Pepe Romero, Goran Schölsher and Leo Brouwer.

Coming from a family of musicians, Daniel Boer Bonifacio started studying piano in his early childhood in Brazil. He discovered his passion for singing in 2014, after joining the “Voz Nua” chamber choir in Aveiro (Portugal). In 2016, Daniel entered the classical singing course in Conservatorio de Musica Calouste Gulbenkian also in Aveiro. Nowadays, he lives in Copenhagen, actively singing with the Suoni ensemble.

Born 1989 in Tuscany, Italy, Alessandro Garau started to play the guitar at the age of 8. A few years later, he began playing trumpet in the local brass band and participated in courses with Adam Rapa Jeremy Pelt and Avishai Cohen. He is an active composer, exploring new ways of crossing different styles in World music. He is currently studying with Paolo Russo and Gerard Presencer. Has been playing in several venues such as Cafe Divino, Global, Giant Steps, Kulturhuset Islands Brygge. 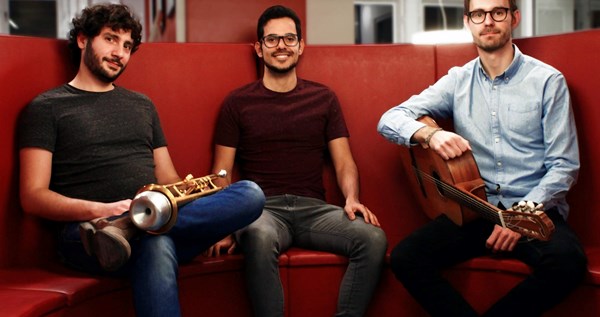